Flowers for your special occasion

If you have a special occasion coming up, why not let Tisbury Flower Group prepare and arrange your flowers.  We do weddings, receptions, anniversaries, funerals – in fact we are happy to arrange flowers for any special occasion.

We discuss ideas and colour schemes with you, and identify what arrangements you need. We purchase the flowers and all the associated equipment. Flower group members then prepare the flowers for your special occasion. You can confidently leave the rest to us. 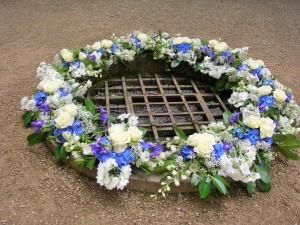 Forty-five of Tisbury’s men died in the 1914-18 war.  Tisbury Flower Group held an event in St John the Baptist Church in Tisbury from the 11th-14th June 2015 in remembrance of them.
The paths leading to the church doors were lined with ceramic poppies, each dedicated to one of Tisbury’s fallen heroes. Above the West door was an ‘A’ frame of poppies amongst a field of green, while over the North door hung a ball of poppies with a topiary of poppies and greenery on either side of the entrance way. 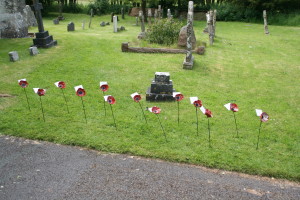 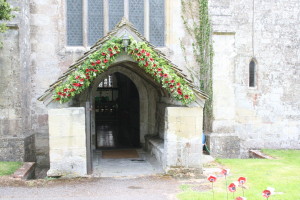 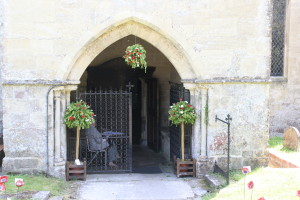 Inside the church, poppy wreaths lined the aisle on the pew ends. A scroll listing the names of the fallen entitled ‘We Will Remember’ stood just inside St Andrew’s Chapel surrounded by hand-made poppies made from material. 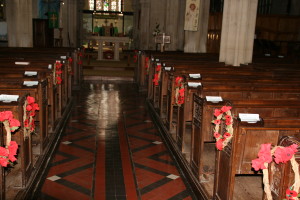 The Aisle of Wreaths 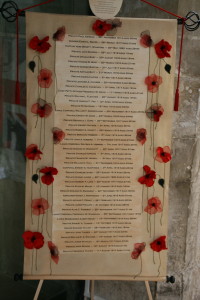 ‘Lest We Forget’ Scroll

The Christmas Truce was a widespread unofficial cease-fire along the western front. Men from both sides ventured into ‘no-man’s land’ and exchanged food and souvenirs. Men played games of football with one another. This occasion was depicted on and under the church window with an arrangement of red and white flowers, a football made of laurel leaves and the British and German flags. A representation of a trench was set up to give a flavour of the horrors of trench warfare. 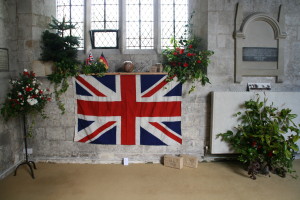 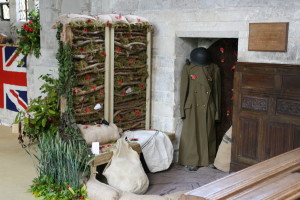 Flags of the countries where soldiers were buried were made by pupils of St John’s Primary School and arranged along the altar rail by the children when they opened the event. A simple flower pedestal of white lillies stood in the corner behind the altar. Underneath was an example of the typical soldier’s food rations. On the window sill behind the altar was an arrangement of cornflowers, poppies and wheat to depict the field of the fallen. On the altar were two candlesticks with flowers entwined around the candles. 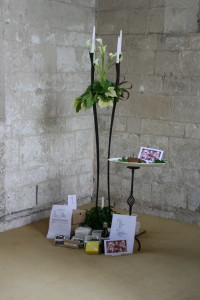 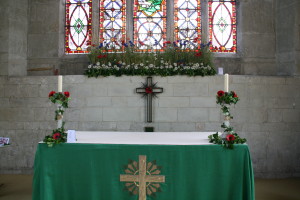 The Altar and Window

To one side of the altar lay a horses saddle with an arrangement to depict a river of blood, a tribute to many of the horses that died or were injured. They were loved by the men who looked after them. On the floor was the union flag remembered in flowers of red and white carnations and blue cornflowers. 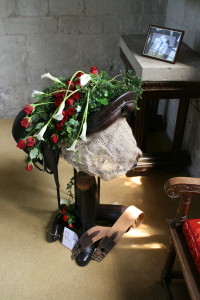 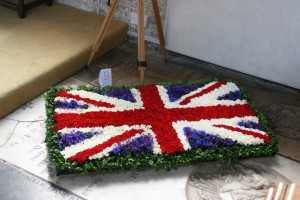 A field hospital was recreated as a tribute to the medical staff and brave soldiers rescued from scarred battle fields of war who were brought here to be cared for. The 45 wooden crosses, each set in a floral tribute entitled ‘lest we forget’, are a moving tribute to these men. 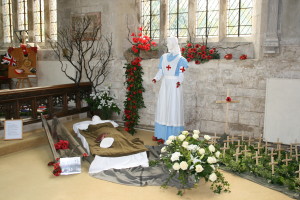 A present was sent to every soldier containing cigarettes, tobacco and a christmas card with photos of the Royal Family by Princess Mary in 1914. An example of this is in a wooden display cabinet. A frame of 1914-1918 cards sent from the front were kindly loaned by Betsy Green. 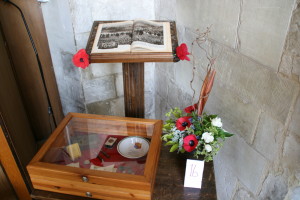 Gifts to the Soldiers 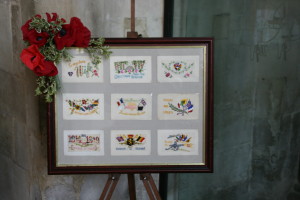 Postcards from the Front

A peace pedestal of white roses stood as you left St Andrew’s Chapel. 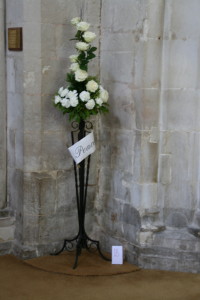 With sincere thanks to St John the Baptist Church, Mr David Childs of the Royal British Legion, and to the Tisbury History Society’s book ‘The Tisbury Boys’. Also to Val Brien for making the beautiful ceramic poppies, and to Betsy Green for the loan of postcards and gifts to the soldiers. Particular thanks to Barbara Oliver for organising the event. The flower arrangements and tributes were created by Tisbury Flower Group Members. Thank you to all those who helped in setting up and dismantling the displays.